I’ve got mixed emotions about this one. I’m happy to bring you my stops on the Crystal Tour…but I’m sad that we’re coming to the end of a great series!

The Air Awakens series, by Elise Kova, is a fantasy series that follows 17 year old library apprentice Vhalla Yarl as she unwittingly saves the kingdoms Prince and is pulled into the world of sorcerers and magic.

I love the Air Awakens series, and the fifth and final book, Crystal Crowned, is coming out on July 12th.  In the lead up to its release there’s a blog tour where people will be sharing their reviews of the first four books, an amazing raffle and a few other treats.

You can join me on the next four Mondays as I share my reviews of the books so far;

There are four affinities in the Air Awakens world – Water, Fire, Earth and Wind.

Take a minute to do this Buzzfeed quiz and see which affinity you have and what characters you are most like. I’m a Waterrunner. 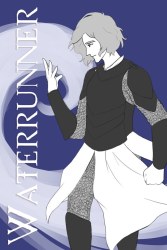 “The ability to command the smallest amount of moisture makes Waterrunners practical sorcerers with a variety of applications such as illusions and the creation of ice weaponry. Like your element, you’re adaptable and can ebb and flow with the tides of any situation. People may mistake your flexibility for being fickle, but once you set your mind to something you will accomplish any task. You embody unassuming strength.”

You can find the full descriptions for each of the affinities by following these links:

Other Events In the Tour

Come join the party and celebrate (mourn) the release of Crystal Crowned!  The more folks who RSVP, the more amazing prizes that will be unlocked.  Just click on the link below and say you’ll be there!!

URL: https://www.goodreads.com/event/show/991545-post-crystal-crowned-discussion-with-elise-kova
About: Join author Elise Kova for two hours of discussion on the conclusion of the Air Awakens series. Bring all your questions!

Raffle
This is the biggest raffle yet for the Air Awakens series. There are multiple prizes that people can win:

I hope you’ll join me on this blog tour. I’ve got some special giveaways planned for the tour and I’m looking forward to sharing this great series with you. If you haven’t read it yet, the ebook of Air Awakens (Book 1) is on sale now for $0.99 at all major retailers. Pick up a copy and let me know what you think!

Tonight's book haul was of the non-fiction persuasion. #bookhaul #usedbooks #malcolmgladwell #jamesdiamond #blink #tippingpoint #gunsgermsandsteel #yesand #leadingchange #personaldevelopment
Thanks to @greystonebooks and @49thshelf_reads I won a copy of 105 Hikes in and around Southwestern British Columbia. I can’t wait to dive in! I’m hoping to head back there in the next year or so and this looks perfect. Lovely maps, illustrations, and difficulty ratings (for those of us that don’t have a lot of hills at home). @stephenhui #105Hikes #travelbooks #hikingguide #getoutthere #beautifulbritishcolumbia
Surprise bookmail this week! Thanks @candlewickpress #partner I’m a huge LM Montgomery fan and Anne remains one of my favourite books. I’m so excited to read this biography aimed at younger readers. #houseofdreams #lmmontgomery #anneofgreengables #biography #bookmail #lizrosenberg
Sunny Sunday's are for reading on the back deck with the golden retriever to keep me company. #amreading #sundayreading #dogsandbooks #priceguidetotheoccult #finallyniceweather
Thanks to the lovely folks at @penguinrandomca I won a copy of Ready Player One and tix to the advance screening! I'd already read the book and was excited for the movie. It's very different from the book but still fantastic! I definitely recommend it, and the friend I went with hadn't read the book and loved the movie. The basic story is the same but the details of the quests for the keys differ. If you go in knowing there are differences and just embrace it you'll love it too. And while the book isn't perfect it's a great read...especially if you enjoy 80s nostalgia. #readyplayerone #readyplayeronemovie #instabook #booksandmovies
Thanks for the free book @candlewickpress This beauty arrived yesterday. I was expecting something else so was surprised to see the gorgeous cover and RED pages when I opened the package. Looking forward to reading it! #bookstagram #thepriceguidetotheoccult @leslyewalton #yabooks #readit
%d bloggers like this: